3rd person aiming is the focused counterbalance to the freemove mobility. Upon pressing the “Aim” button (L2) you transition to an over the shoulder view that focuses forward.

It should resemble simple 3rd person shooters, like Resident Evil, wherein you can aim with the Right Joystick, there’s a dot cursor, your movement slows, and your character moves in “tank-like” controls; aiming forward but moving in all directions.

Aiming will tie with the ranged combative elements of the game: spellcasting, and ranged weapons.

Upon clicking and holding the “Aim” button (L2) the character controller state changes to the “aim” action state.

The controller shifts the moveState to the forward aiming locomotion.

This is currently as far as it is developed. I properly enter the states, however, I do nothing more. 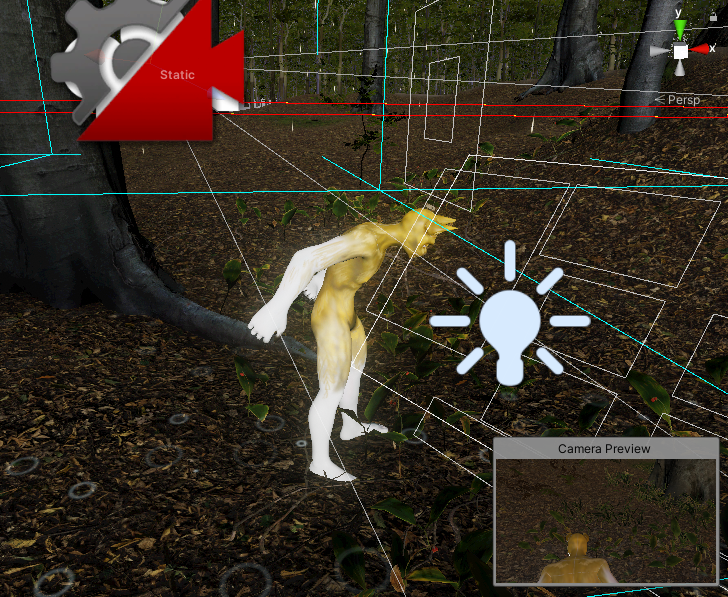 Currently, the aim camera is locked to an empty transform which is a child of a bone in the character armature. It’s one of the upper spine bones.

When aiming vertically, we scan over an animation layer that curls the spine up and down, tilting the camera up and down with it.

Right now, the motions are way too excessive and are unwieldy. Additionally, when you move forward and around, the camera bobs and sways in an unmanageable way.

The structure of how the over shoulder camera is aimed and ties with the character needs to be fundamentally changed to properly work. 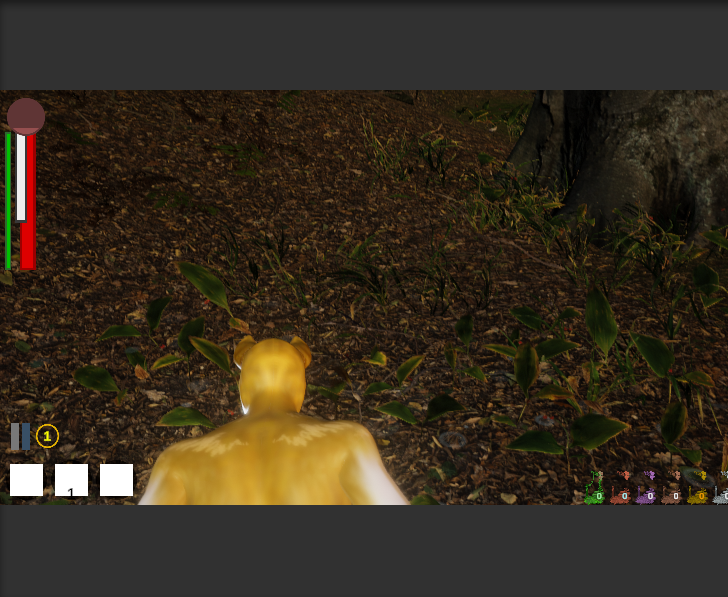 The character has a locomotion tree that already accounts for the ‘tank-like’ controls, enabling side and back movement animations from a forward perspective. Additionally, the character still rotates properly based on the horizontal input of the right joystick.

Phase 2: Targeting with no Combat

Targeting will be a major layer to add to the aiming functionality, I don’t feel that it needs to include the combat elements at first and developing them cleanly without any component requirements will lead to a more concise implementation.

Once we are able to aim, we need some general detectors to ‘query’ and identify various targets/angles/directions.

Note: We may want to separate it even further and not even tie them directly to the Aiming functionality, as some of the targeting methods are non-aimed.

When queried, this targeting needs to return a position and direction that a function will use to set forth a projectile, cone, beam… or anything that requires a frontward trajectory to execute.

When queried, this targeting needs to return a target object from a frontward camera ray.

Some actions may require the target be a unit (posessing a controller component) but I’d like to also leave it dynamic if we can to allow for targeting inanimate objects for various gameplay elements.

This could be something like a spell that lights a target on fire (Damage Over Time debuff), being able to target a wall of vines and burn them away.

Otherwise, we simply need to use projectiles for targeting inanimate objects.

*Just for your knowledge, this is unrelated to aiming specific functionality.

Once Aiming is primed and functional; tight aim control, and proper targeting; we can proceed to integrate the Aiming into the Item Combat Components. This would be a matter of using bools and triggers to enable and disable various elements in the respective components.

Cosmetic things like putting away your melee and brandishing your ranged weapon onAim.

Functional things like interrupting/disabling melee while your ranged weapon is out. Or more fluidly: waiting for a melee input to interrupt your aim and switch to freemove.

This stage will require us to do an assessment of the item combat components and sure up what they do and how they accomplish it.

The spell component will be the best to begin with. It’s much more isolated from the melee and ranged components and will be utilizing the broadest range of targeting methods both aimed and open targeting.

The spell component has channel and cast times, channel and cast animations, effects to apply, and resource costs. To cast the spells, there is a step that queries the controller for targets of type. (self, target, aoe, etc.)

Note: Spell Effects (SE) are their own component that an Item Spell Component applies. In the included image you can see a “Stats Over Time” buff.

The ranged component is unimplemented but can hold a similar structure to the spell components.

The differences would be that channel time would be “draw time”. In that it is the time for the item to get armed to launch. For a bow it would be drawing the string, for a rock it would be raising your hand to throw.

There would be a projectile ammo object needed.

The projectile types would be:

One last function would be to be able to define that the thrown item actually throws the equip as opposed to an ammo. In the case of a hand axe, you’d throw it, it would leave the player inventory, enter the world with a hitbox, land and disable the hitbox, then become recoverable if it hasn’t lost all it’s durability.

The melee component is largely unaffected by the aiming functionality and other components. However, it’s important to consider that while all 3 combative components can only be used one at a time, the flow and transition between them require conscious development.

The grand ideal of the 3 combat components is to be able to say:

Use an unaimed knockback blast as you engage an enemy. They launch away as you prime your axe and lob it into their knocked over body. As they’re standing up you’re running in for a sprint-attack, which you then continue to combo from to assault them with a barrage of melee hits. They leap backwards because they’re a unit type that tries to get its bearings, so then you channel an aimed fireblast at them to bridge the gap and finish them off.

The significance of these fluid transitions between attacks is that because the combat functionality originates from the items equipped, you will need to employ different strategies based on the various equipment you’re currently carrying. If you can’t find a knockback power blast item, you can’t factor that into your combat at the time. Perhaps you have a poison sting or something instead.