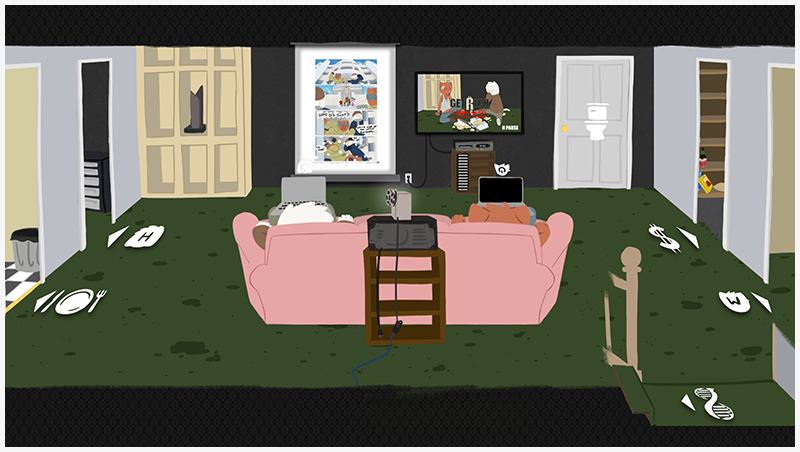 The Get Rich interactive site is a complimentary site which allows the user to click around and explore the Get Rich apartment. Rife with secrets, stories, and a means of discovering intimate details of Wolfgang and Hayes’ day to day lives this project stands on its own in many ways.

Not only does it serve as a gamelike platform for exploration, it also serves as a HUB for all Get Rich media such as links to the Unanimated and Animated series, as well as links to the shop items, artist websites, and to other Genome Studios projects.

The purpose of the Get Rich website is to sweep people off into the fun and intrigue of exploring around the Get Rich universe. It is meant to deepen fans understandings of the characters and their lives and build them toward a more intimate connection with the characters. The Point and Click style of the mechanics of the site allow for unique expressions of stories and the integration of mini games and experiences throughout. All in all the site is meant to showcase the multimedia capabilities of Genome Studios and show that the Get Rich universe is a versatile and flexible narrative that can enjoyably be experienced in many ways.

The Interactive Site is predominantly aimed at fans and the audience on the fence about becoming fans. It is meant to stimulate and retain the fandom with less immediate content that instead has to be discovered and unearthed.

The point and click type of mechanics used is directed towards a niche market of fans of classic titles such as Myst and Monkey Island, however the genre and fanbase persists by modern indie titles as well as a similar genre, the dating sim and visual novel.

Because the base platform works natively on the browser and is compatible with mobile phones, there is the possibility that outside audiences could be drawn to the Get Rich series through the exploration mechanics on the site.

There are many potential directions the Interactive Site can take.

We could prioritize ‘campaigns’ (the small stories that can be triggered in the site). This would involve the deepest investment of time and energy. It would require visual assets, a story/plot, triggers and events being properly integrated into the site, and final polish.

Mini games. There would likely be less of an art demand for this development, however the complexity of programming would be a great deal higher. A proper scope and simple mechanics would alleviate the burdensome nature of going in this direction.

Deepening the range of things that can be explored and discovered about the characters would further solidify and satisfy the fans desire to more intimately understand the main characters, this would likely have a higher visual content demand, however, would be used in very small bursts hardly considered ‘projects’ of their own.

Expand on the complexity of the character schedules. This one would be one of the highest visual asset demands aside from the campaign development. It could also be considered as part of deepening the characters development through the discoverable things however would be largely in its own league of production. I, Gaian, am biased in favour of this as I feel one can create a whole range of visual stories out of the shifting and changing positions of the characters throughout the site. You can have them hold a party which would allow the showcasing of the slowly expanding roster of Get Rich characters on one day, you could depict a pipe bursting or a laundry accident another day, you could have guests come and cameos and anything else. All discoverable over time.

Adding more regions to explore would build more canvases to allow for exploration and adding new stories and features to the site. However, without a range of other things included in it the area would be very sparse.

Lastly we could expand on the narrative mechanics available to craft better experiences. Things such as making a menu that allows you to travel to the location of a character without knowing where they are; triggering the change and reposition of in-game elements; expanding the dialogue box and dialogue options; optimizing the camera and cinematic effects; and others are all things that would build up the narrative engine for the site and Genome Projects in the future.

Investing in the site would further expand and deepen the fanbase over time and build towards a larger more intricate experience for someone to get lost into every once in a while. It won’t yield immediate results or even immediate satisfaction but it’ll be something that will grow in strength and appeal as Get Rich becomes more mature and the fandom grows.

The biggest benefit for investing in the Get Rich Interactive Site would be that it builds up the point and click narrative engine that the site runs on. This would have lasting benefits in allowing future projects to use the same tech to build their own range of experiences and stories.

The Interactive Website cannot be made a priority to either the Genome Studios primary plan of action, nor to the Get Rich series. It has a great deal of latent potential however it’s niche appeal and expensive features do not warrant an immediate push.

Instead it will remain dormant and have small bits and pieces added to it as time allows between projects. If the Get Rich team is inspired, they can add a campaign to the site as a project to pursue.

While the Get Rich Interactive Site is a novel project with a great deal of potential. It doesn’t have the broad appeal or expansive enough content to really be worth investing in in the near future.