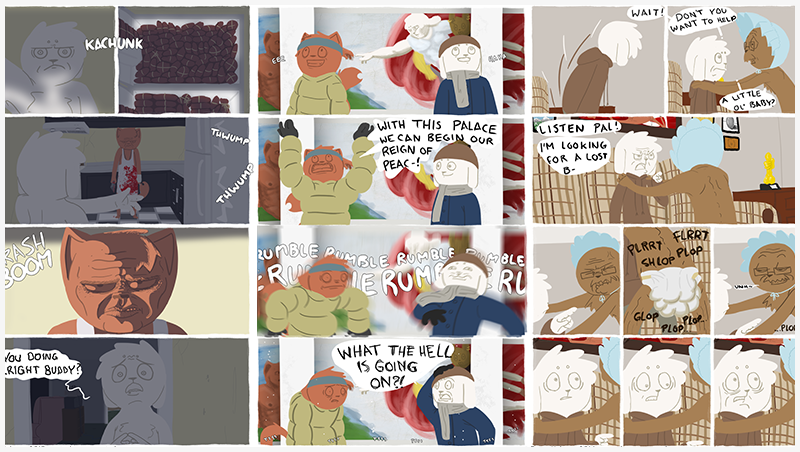 The Get Rich: Unanimated Series is the pioneer project for both the Get Rich Series as well as Genome Studios as a whole. With 2 published comic episodes, and another on the way, it is the most established project in the Genome Studios roster. Follow Wolfgang and Hayes in their day to day journeys through chaos and excitement as they try to pay off each months rent, and maybe in the process Get Rich.

Therefore, the Unanimated series exists. It is the main conveyor of story in the Get Rich series, depicting long wild stories befalling Wolfgang and Hayes in the course of living their lives.

The Get Rich Series as a whole is primarily directed towards young adults ages 18-35 who enjoy American cartoons.

The content is adult and is most easily related to popular adult cartoons such as Simpsons, Family Guy, American Dad, South Park, Rick and Morty, Bob’s Burgers, and more.

The visual style, while still directed towards cartooning is not explicitly related to ‘adult’ cartoons. It takes on the closest appeal to shows like Adventure Time, Regular Show, The Amazing World of Gumball, South Park, Ren and Stimpy, Happy Tree Friends, and other more ‘cutesy’ styles of cartoons.

Its appeal to young adults is based in the tone of the premise. The main characters are adults who are struggling to get by month by month. They have decent but modest living arrangements and struggle to maintain the expense of their livelihood. The stories of each episode take part either during their work, or during their breaks from work, as most people can relate to.

Some auxiliary markets which are drawn into the series are film buffs, as the visual presentation often seeks to replicate cinematography and the styles of famous film directors such as Stanley Kubrick, The Coen Brothers, Quentin Tarantino, and Wes Anderson.

Likewise, fans of photography seem to be drawn in as well, likely for the same reasons as stated above for the film buffs.

Lastly, while harder to quantify, fans seem to resonate well with Gaian, the director of the series’, flavour of story and presentation. He feels like the subject of sexuality has as much merit in storytelling as violence, that minority groups can be a part of a cast without having to have their traits as a minority used as a primary trait of their character, and that love and friendship can be a driving force in story telling rather than conflict and interpersonal drama. All are topics he directly or indirectly presents in the direction of his work.

This project is one of the most established in our roster. Currently updates have been made once a week, however, now that Get Rich is being created by a team of 2 the best thing to do would be to expedite the creation of the series to have steadier more frequent updates.

Through the faster creation of the Unanimated series, Gaian will have much greater ability to expand and grow the story and his storytelling ability. This will be a critical gain moving forward.

The Get Rich Unanimated Series is by far the least risky endeavour for Genome Studios. The project has been ongoing for 3 years, has proven to draw in an audience, and furthermore, a dedicated fanbase.

This project drives the entirety of the Get Rich Series forward. Because it focuses on the story of the characters is fosters investment in the characters and world; it shows and solidifies the potential of the cast and style for other mediums such as animation and games; and is one of the easier forms of content creation.

The Unanimated Series is the root of the Get Rich series. It is fully and well worth further and immediate investment and expansion.

With Gabi, the new Get Rich team member, the Get Rich Unanimated series will hasten the release of pages and episodes. We will expand on the art style and quality in order to make the presentation more professional and appealing.