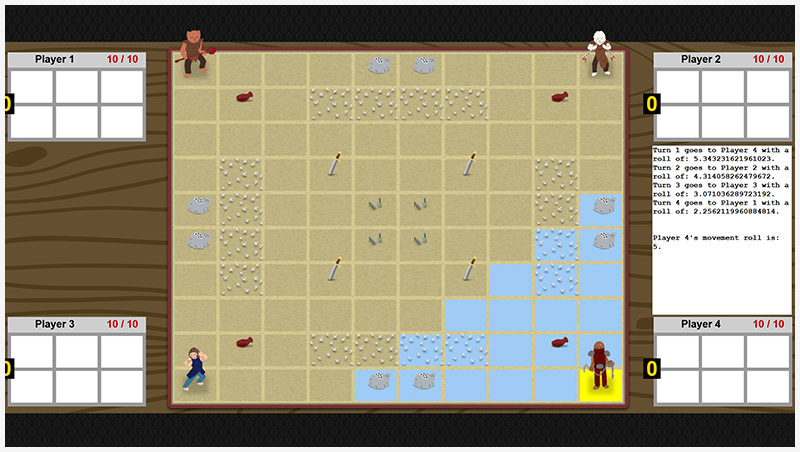 A nearly concluded adaptation of a school project, a paper prototype board game. Gladiators serves to prove that Gaian is also capable of building game projects that are comprehensive in quality and versatility. Gladiators comes with an included game editor which allows for custom games using the mechanics of the original game concept.

This project is likely concluded however, there’s nothing restricting it from being revised for online multiplayer and final polishing.

Gladiators was meant to be a follow through from the creation of a successful paper prototype of a school project. While there were no further goals with this project there are still some latent opportunities available.

Because of the simplicity of the visual design, it allows for easy introduction of new game pieces which can add to the cross promotion and collaboration of the various projects in the Genome roster.

Gladiators are for fans of fast competitive board games. The mechanics are simple and the game play is versatile within the constraints of the system.

Nothing much is planned for Gladiators, there are things that can be done to further its completion and polish such as Multiplayer, a custom map library, and unlockable game pieces.

The likely reception of Gladiators would be pretty low. While it has some fun mechanics and an open editor, visually it’s not up to the standards of what people may want, and without multiplayer there’s little reason for people to invest themselves into it unless they’re brought to the game for some local playing.

As a novelty, add cast members from the Genome Studios roster. Otherwise leave dormant until the inspiration arises to build up the game to a more marketable quality.

Gladiators is an older project done as a novelty and exploration. There are no new plans for this project moving forward.