Building on concepts from: Awaken Guardian Lore and Themes. 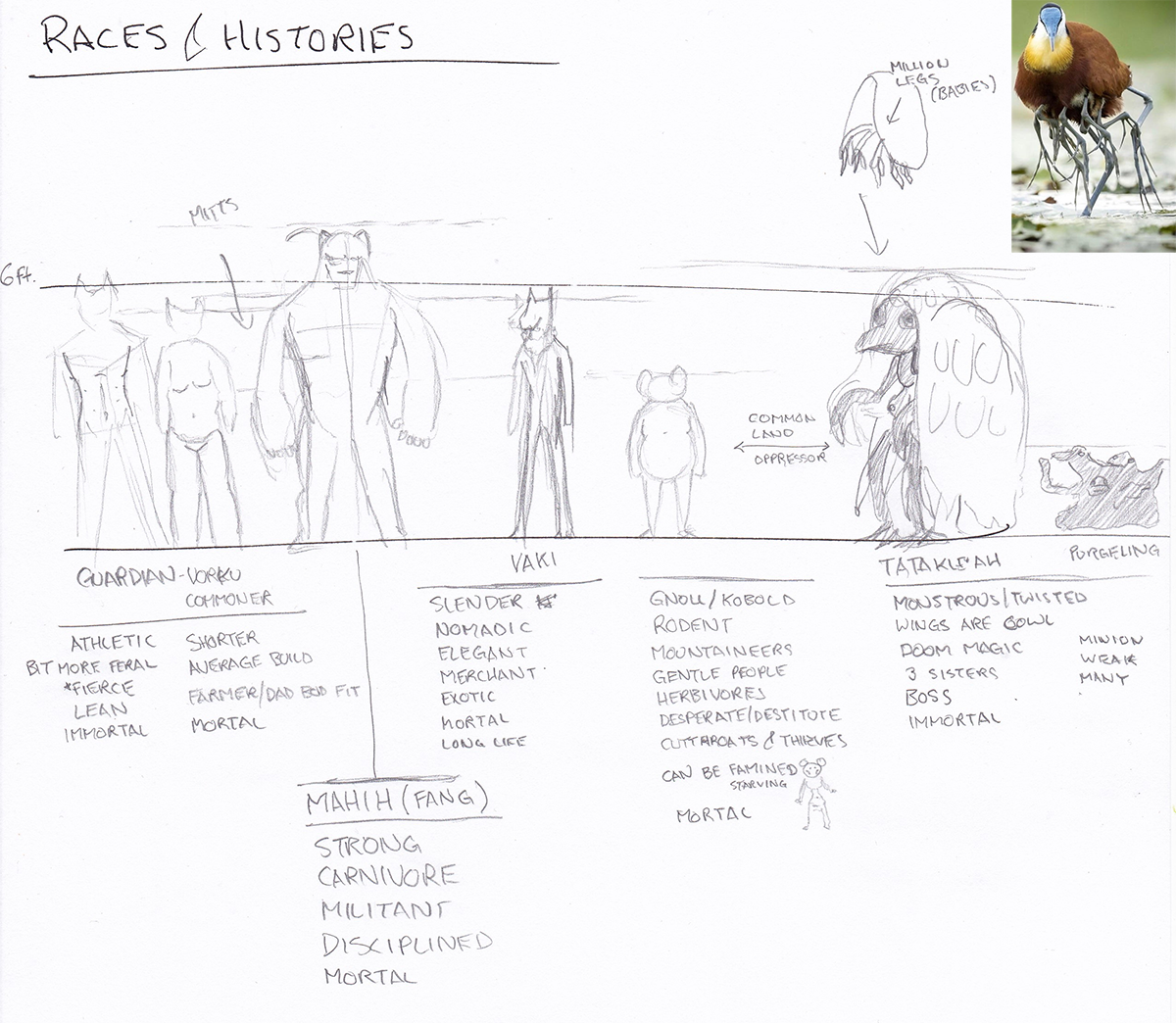 Once a strong and well established society, the Vorku people have all but been wiped out. Their capital, Nika City, is in ruin and the Guardian has set forth to pick up the pieces.

The Vorku are a people with broadly varied bodytypes and fur colours, but serve as an average representation of humans, such that the player can resonate with the Guardian’s people.

Inspired by Plains Cree culture and rituals, the Vorku are strongly unified by common beliefs and traditions and pride themselves in working diligently to bring prosperity to their people as a whole. No role is unimportant to the benefit of Nika.

Old Nika was led by the first Guardian, known as “Mother”. She was a highly respected and honourable leader who took consult from a large council of elders and figures from the city. She was compassionate and rose Nika and its people to the grandeur and advancement seen throughout the ruins of the city.

There are a couple Vorku outposts throughout the world, identifiable by the parallels in architecture and design but they too are long abandoned and lost to the environment. One of which is a scholarly campus built over a ruin that houses ancient dark rituals and magics, it was led by one of the council members who spent his life researching the Corruption that was befalling them in their time.

The Mahih people are one of the only societies that have survived the onset of the twisted corruption that is permeating the world, in fact they are thriving.

The Mahih culture is founded on a severe, disciplined, militant, communal structure. They have rigid hierarchical structures including a ruling elite. Mahih are built like trucks, men and women alike, and thus any Mahih is a very formidable opponent. Additionally, the Mahih have a massive military pillar in their society with highly trained, highly armed soldiers.

The Mahih people are culturally opposed to outsiders and fiercely defend their territory, they have a strongly enforced belief structure and few waver from their hostility towards others and their patriotic defense of their ideals.

Mahih are carnivorous and apex predators. They are livestock farmers and hunters for sustinance.

The Mahih territory is a closed region and highly defended.

There is a secret council, obscured by the ruling elite, which truly rules the society below. The one at the top of this secret council is an immortal. Unknown to its society, there is much corruption and injustice pervasive throughout the society behind closed curtains, perhaps the Mahih simply don’t want to know.

The Vaki are close cousins to the Vorku, stemming from similar heritage and cultures. The Vaki, however, are nomadic people with small roots and oral history. The Vaki have a much longer lifespan than the Vorku, living nearly 3 Vorku lifetimes.

The Vaki are often traveling merchants, scholars, missionaries, and other humble roles. In most Vaki lifetimes the people explore and take part in many exotic cultures and regions, often being adorned in droves of rare accessories and artifacts. The merchants are often even more opulent.

Some Vaki tribes continue to serve a Queen, however, the Queen has been missing. Followers of hers scour the lands far and wide in search of her, in hopes that her return would unite the Vaki once more.

These people live in the cliffs and caves of the mountain forest region to the west. Once a humble people who thrived in the area they are now scattered and destitute. Their lives ruled by terror and despair under the domination of the Tatakle’ah sisters. Most fear to even leave their caves as anyone could be target to the Tatakle’ahs evils.

Countless of these people are on their own, often having lost their families to the sisters, the evils flooding the land, or to starvation. The ones who survive do so through any means necessary. Thiefs, cutthroats, and bandits are often the roles that these survivors take to continue on, relying on their dexterity and stealth to get by.

The rodent people are herbivorous.

Contrary to their natural demeanor and physique, there is a subculture of these rodent people who believe in power above all else. These fanatics, known as Brutalists, have a one dimensional fixation on combat and power. They fight anything they can with giant weapons, in order to reach the highest combative potential they wear clothes with little protection, instead prioritizing raw damage output and evasive measures to fight. The Brutalists have little depth to their culture but welcome any lost souls in need of purpose. They worship Pyros, a god of destruction.