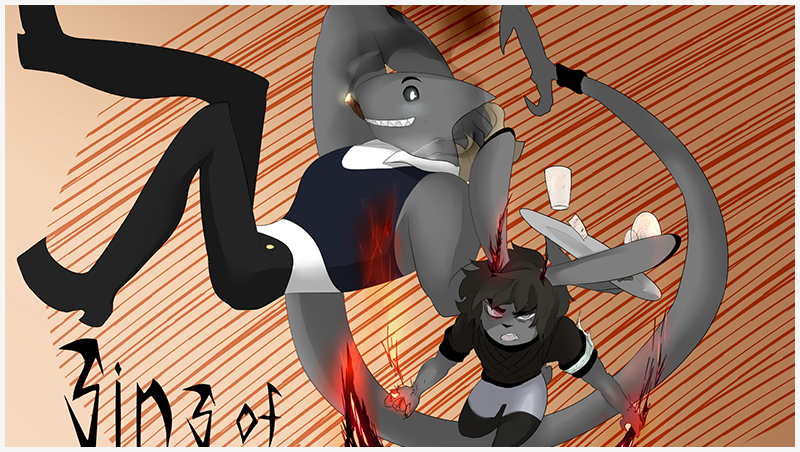 The newest project to be added to the Genome Studios roster. Sins of the Fangs is created by our very first supporting creator: Terry.

In a land where humans have gone nearly extinct, and the power of the arcane has taken grasp. A sentient group of strange creatures now rule the land while bias, prejudice and civil wars run rampant across Aeona. A Shark named Birgus has been stranded on land all his life. Though he and his kind have been deemed dangerous war mongers Birgus is determined to solve his problems with peace. His adventure begins when he stumbles across a malevolent Fioria, who wants revenge on his kind.

Sins of the Fangs is a passion project for Terry. It is also her first major comic production. It is an overall pursuit of story telling, artistic development, a career of original content creation and all around learning in the field of illustration and comic creation.

Sins of the Fangs has a strong style and presentation unique to Terry. Its quality is ever improving and has an immediate appeal.

Its nautical theme directs an appeal towards a more niche group, however that group is strong and stalwart in its love of maritime, sea faring, oceanographic, and aquatic themes. You can look to the popular band Modest mouse, the works of H.P. Lovecraft, and many more examples of hugely successful and supported media which often takes on an oceanic theme.

The anthropomorphic nature of the sea creatures into humanoid characters has a further appeal in the ‘furry fantasy’ subculture which is a strong and independent community which is deeply supportive of any new media that represents that ‘furry’ appeal. Furthermore, there is a deeper niche within the furry community which identifies with aquatic creatures and monsters. This content strikes that chord in the community and has the potential to tap into that support network so ingrained in the furry community.

Lastly, Sins of the Fangs takes on an anime like direction of story telling. Using dramatic action scenes interlaced with lighter more goofy interactions between characters which builds towards a long term slower developing story arch. This is a very successful story telling foundation which is easily proven by the depth at which anime and manga saturates global markets.

Terry has always pursued this project as a hobbyist endeavour. However, with her new steps into integrating with Genone Studios we hope to refine and direct its creation and promotion to become more calculated and professional.

She will be taking steps to alter the format of the comics to better facilitate it being printed as a published comic series.

The marketing for the project will be reviewed and refined to better tap into the identified market. Plans will also be made to better maintain an outreach and facilitate user engagement.

Lastly, a dedicated Sins of the Fangs website will be built to best present the series and allow for unique features and means of presentation.

Because Terry has been creating this series while maintaining a job, Sins of the Fangs, like Get Rich, is a very low risk project to pursue.

A dedicated website would likely be the greatest risk, as users on social media are often hard pressed to follow links to outside sources. This will likely have to be a slow side development.

All other actions taken to expand, improve, and broaden the quality and reach of the series should simply yield a better response from the audience and an expansion of the fan base supporting it.

Genome Studios will take strides towards refining Terry’s strategy for working on Sins of the Fangs, with a little flexibility and effort it should yield a greater response to her work.

With Terry’s help, Sins of the Fangs can be better integrated to the Genome Studios site and brand and will be further promoted by Genome.

Sins of the Fangs is a solid work with great potential. As it becomes more refined and better marketed, it will tap into and build a larger audience for itself. It is fully worth investing into.