The Vitals Stats are some of the more unique elements to AG. Because of the survival nature of the game the vitals are important in adding layers of survival to the standard “no health, no life” mechanism of most games. They also serve as a means to adding some complexity that a more standard survival game would demand.

The Vitals System hinges on one major aspect: when your LIFE goes to zero you ARE dead. We add a layer of survivability by making a preliminary health bar in the form of Flesh and Blood (BLD). Blood is restored more quickly to facilitate constant gameplay, much like an energy shield works in Halo or Borderlands. LIFE is restored on a much slower timeline in the game. This is to maintain a semblance of accountability and urgency in protecting your lifeforce during gameplay.

HUNGER is another force that plays into the survival of your character. Time and most gameplay actions deplete hunger. Recovering vitals adds hunger, recovering stamina adds hunger, hunger is gained over time. Most other actions deplete stamina which adds to the hunger cost. When hunger reaches 0, vitals stop replenishing, and all additional hunger gained gets turned into LIFE DAMAGE

Additionally, there are the secondary vitals and damage types. All of which act and react around the LIFE and BLOOD stats.

Combat and Mobility Stats are some of the most commonly understood stats. They are used similarly in AG to add variance to basic encounters of running, jumping, attacking, dodging, and the like.

Perception Stats are predominantly oriented towards interaction with AI units. However, if bound to the player character, a richer range of purpose and use can come from them.

While many perception stats are around hard technical detection for AI’s we can expand on some interesting features to make for an interesting and varied player and AI coexistence.

The first set of stats: HEAR, SEE, and PERC all contribute to how a unit is able to detect outside bodies, items, and objects of interest. These affect the process of querying the game for objects to weigh in on with AI processing steps. For a player, these would ideally restrict graphical representation in game until the in-game player unit is able to detect the same bodies by the same constraints held by the AI.

INS is the stat for an interesting system feature. The various enemy stats one would be able to see in a standard action adventure RPG style game would be accessible in similar ways: locking on, aiming. However, instead of having instant access to these details, we will instead require various lengths of time to ‘process’ the information. INS would be your characters ability to read the situation and properly understand the ‘stats’ you’re able to see in your opponent or target.

The idea of how this would play out in gameplay would be that:

You see a target in the woods at a distance from you. Because you’re able to detect them in your other perceptive fields the detection time begins. Because you’re not zoomed in or targeting them by aiming you’re getting the slowest possible info. Because of this, you see the target unit fresh and un-affected by status effects or damage. As you get closer and lock on, your INSIGHT first reveals that the target only has half health, their character animation reflects that along with their health bar appearing over their head. You leap in to engage with them, starting your fight. Your lock on persists and as you circle the target their status effects become visible, revealing that they have 3 strong buffs. You continue the fight because you feel confident that their low health is more damning than their positive buffs. You continue to fight only to finally understand 60 seconds later that the target is also 4 levels higher than you. This instantly solidifies the clarity on the battle and that you are a lot less capable than you’d originally believed.

Finally, Visibility, Audibility, and Readability are your defensive perception stats which cause you to be more or less detectable by outside sources. Armours, status effects, and other elements would cause you to become more hidden or less hidden to other perceptive units and their stats.

What you do is how you are. 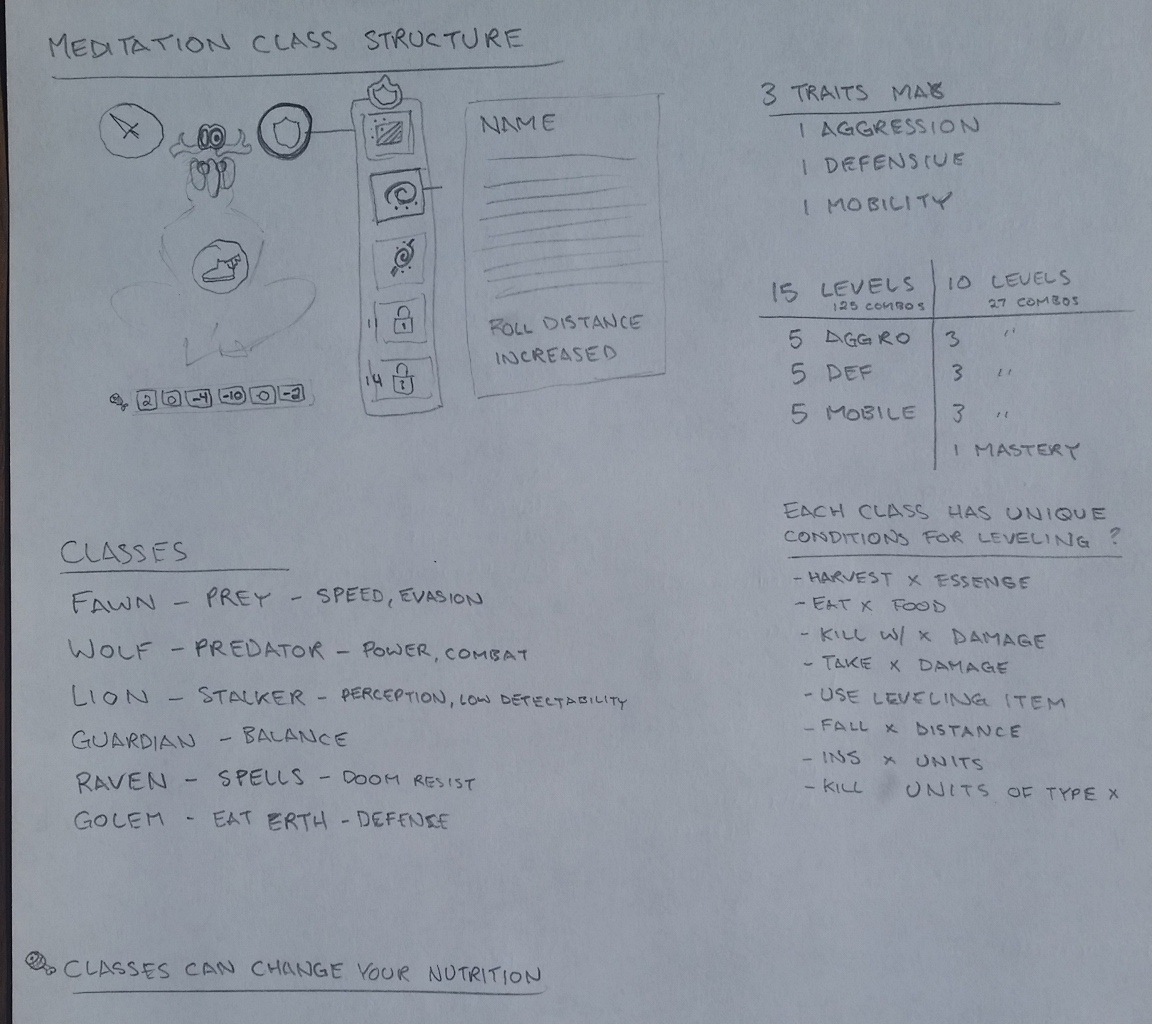 Meditations are the classes of our units. They set the base stats, stat level progression, nutrition value of eaten resources, and sources of class experience.

Meditations are supposed to be broad strokes of a given “lifestyle” the meditation that drives your behavior. A rabbit and a deer could both share a class as prey. They both are skittish, rely on speed for survival, are docile in nature but can attack when backed into a corner. In this way, we can craft talents/attributes that give effects and benefits to those aspects of their survival.

The talents for each class are of 3 types:

A class can get possibly 10 or 15 levels (benefits of either depicted in the notes above). As a classes levels increase, so too does their pool of talents to use. Each level unlocking one of the talents available to the class.

Each talent type would be equipped at the same time, however, only one at any time. This way, one can affect and bolster aspects of their abilities at any time, but only get access to powerful ones later in the class progression.

From the Prey example above, a prey may start with a “Dash” burst of speed buff at level one. This would improve it’s movement speed and contribute to the base mentality of the class: “Speed allows you to escape because you don’t want to fight”. The dash is a mobility talent and thus takes up that equip to make “Dash” always available as a castable spell (L1).

Further into the levels at level 4, a defensive ability is learned. It makes it so your knockbacks are heavier, contributing to longer stuns. Stunning an enemy gives you opportunity to get out, and works well as an ability for a higher level Elk.

At the beginning the player starts only with the Guardian Meditation, this would have a balanced set of talents throughout the progression, covering combat, navigation, survivability, and carry capacity.

All new classes start at level 1 and must be leveled by playing in the game world.

Lastly, classes have different values gained from nutrition. A prey meditation would only benefit from HRB essence consumed. ANI, BILE, and ERTH would be negative, and Exotic and spirit would be neutral.

Stats for gear and weapons.

Stats for gear and weapons.