What a loaded 2 months.

I had the good intention of doing monthly updates and roundups of what’s been going on, how naive. Finally, there has been some breathing room and it would be a great time to let you all know whats been going on… it’s been a lot. Certainly has felt that way.

We have been busy expanding on our gameplay studies and quantification. In pre-production your objective is to create the gameplay and features you intend to have in the final product, but you’re also trying to make meaningful understandings of what the experience of those mechanics bring, and how to build a strong cohesive world made out of all the different elements of gameplay and presentation. It’s hugely interpretive and mystifying. That being said, it’s been an incredibly revealing and fascinating effort. Everything needs to be considered and weighed against what you’ve built and what you plan to build.

With the Proto Dungeon we have been setting forth to try and get a grasp of the scope/scale of the game world; how much time between resting points in the game world; how hunger and resources affect the experience; the cost of locks, treasures, and rewards; the different styles of world features, such as climbing and jumping puzzles, combat heavy areas, challenge areas, side paths and exploration areas; and what kinda of features and mechanics does the game ask of us just from how we experience the game. It’s very cool to be doing work wherein the game itself is basically begging for features and capabilities just based off the inspiration and potential it already presents.

Overall this has been a very enchanting and revealing process and I’m excited to have lots more of this on the horizon. This is where we will really be tested on our capacity to deliver a strong game experience from the features we are building in.

This has been something I’ve wanted to announce for quite some time! Our team is growing!

We have the great fortune of beginning to work with all sorts of developers of all sorts of skillsets. Everyone is very eager and excited to be contributing to this project and its potential, and many have already been able to start applying themselves to the challenges we’re facing.

I’d like to formally welcome Kate, Mica, Ben, Dom, Sean, Mike, and Catherine to the team. Your guys’ contributions are invaluable and serve to realize my long time dream of working with a team on a project at Genome Studios!

Kate has been hard at work rigging and exploring a more complex unit, slated to be a boss mob. After a LOT of figuring, she finally managed to break through and get this Owl Sisters neck working real nicely. We’re very excited to get her built up and ready for the game! 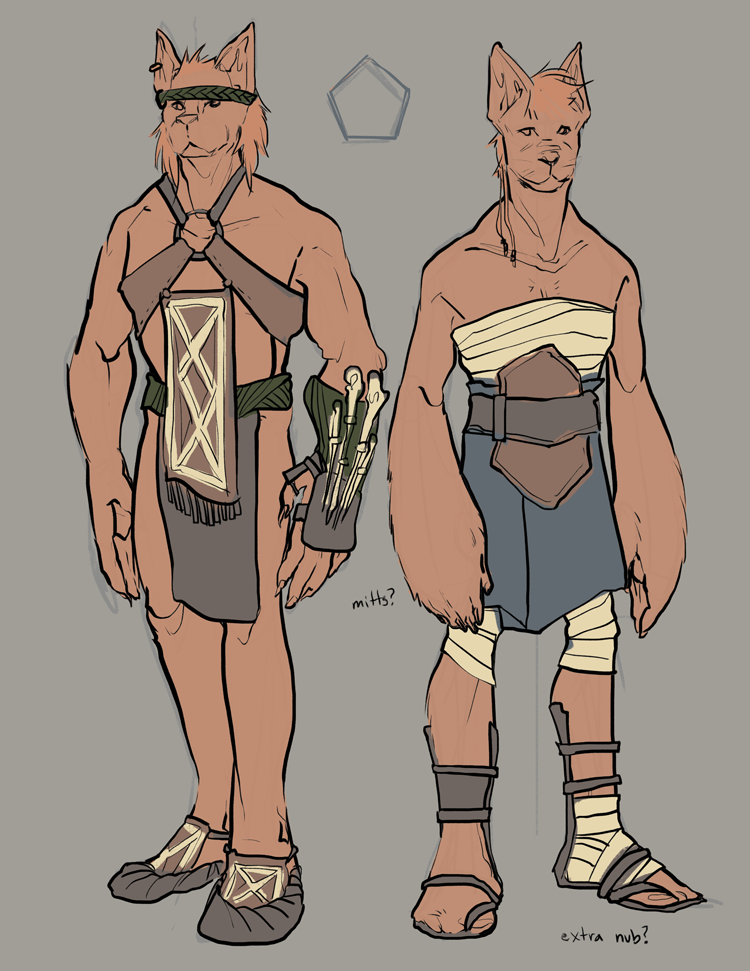 Still in the works.

Catherine has quickly lept into her Concept Artist role and is already knocking our lights out with her work. We’re just beginning to lay out some foundations for the Vorku people as well as other races you’ll meet in the wild. For now, lets just gawk at the very first drafts coming out. Her work will lay the foundation for all the rest of our technical art work to stand to a very high quality.

One of the most demanding aspects of this past 2 months has been the onslaught of funding applications and engaging with external organizations. It hasn’t been a bad experience by any stretch, but it has been a very costly to my time and limited energy.

It’s probably not appropriate to talk about the status of our applications and whatnot, but we have a handful of applications pending and have our fingers crossed. An approval in any of these programs would give us some MUCH needed resources to continue our operations and deliver better and better content. It would also allow Genome Studios to scale up our compensation for the team which I think is already becoming well deserved.

Cross your fingers for us and hope for some successful outcomes. We are reeling to keep working on this sweet project!

This is hardly newsworthy but it was SUCH a demanding experience I wanted to blow off some steam and share in the turmoil.

I began looking into proper software versioning tools after Unity’s “Collab” service was essentially non-functional, and I had recruited Dom, our Programmer. It was imperative that we get this software figured out and implemented cleanly and strongly so that the work we produce in the future is not at any risk of corruption or who knows what other screwy things can happen with technology. You all know what I’m talking about.

I resolved to use git with git large file storage. A standard solution for software development versioning/collaboration needs.

At first we hit a few snags getting it to work, but it’s alright we’ve got plenty of time and it’ll simply need a good seeing to… then the funding applications, meetings, and workshops came rolling on in. Maybe not so simple…

Time passed and slowly but surely the urgency of getting the versioning software going was escalating. Dom had been on reserve for over a month and nothing was happening. Time to rip the bandaid, knuckle down, and slam out this versioning software problem.

I spent weeks… WEEKS dealing with this stupid problem. There is LITTLE record online of getting Unity to work well with git, and it was causing enigmatic problems and concerns. MY version was working fine, but whatever was going on with git was basically chewing up and spitting out my project on the other side. Completely shattered to pieces and broken in a way that was completely irreparable on the collaborators side. This was an issue that literally only I was able to address and resolve. I know what the files are in the project, I know how the project is supposed to work in the editor… Clocks ticking.

After a long week of work, I started to feel the pressure. The 2 month mark was on the horizon and I just couldn’t leave the issues any longer. I was feeling defeated, burnt out, and daunted by this problem; already considering alternatives if it didn’t work out. So I set off on Saturday evening to start methodically trying to solve every problem that was cropping up. I spent 35 hours with 4 hours sleep trying to fix the problem only to be left with little progress and a work week in front of me.

It’s taken 2 more weeks for me to finally bring this thing around. Literally as I wrote this sentence, I stopped to extend the invitation to try and start downloading the project to the team.

It has been a crushing ordeal that took a year off my life, but it marks the beginning on development collaboration. We will be able to realize more features and systems to a greater quality from here on out. That has me titillated.

2 months further in and things are looking ever more promising. We thank you for your patience and your support in following our progress here at Genome Studios. Things are ramping up and getting real exciting. Keep your eyes open, your ears clear, and your fingers on the Genome heartbeat. We’ve got a lot on the way!

Here’s to 2 more months of great progress and news!