Hello Everyone, and welcome to March and April in Review. Or as I like to call it: “The completely normal amount of months to wait before summarizing them into a blog post in Review”!

A very large amount of not a whole lot has been happening in this time, so I figure now is the perfect time to get you all up to speed with every last detail of it!

Okay okay okay, so then what did come up in this very reasonable span of 67 days?

Lets start way back in the wake of February’s Awaken Guardian push!
Since I left off with a playable build, I ended up breaking down the game once more to start revitalizing the World Building. It’s been very clear for a while leading into that last build that Mothers Dream, our home point in the game is far too open ended for introducing the player to the ebb and flow of the game.

This time around I’ve prioritized a design that starts narrow and funneling, but then through natural game progression and insights can be opened up and brought to that more open ended state that the past design had from the get go.

On top of that, I’ve breached a little further into trying to realize a true “magnitude” of the game world. Very indicative of the Dark Fantasy genre is the scale and size of the world around you. You feel small, in the shadow of empires and ancients that left a legacy that towers far above you. I feel that with this new pass at the environment I’m clawing ever closer to the specs for a world that can be realized in that same way. Two words: “Bigger”.

All this world building has been, in part, to better realize a narrative flow to introduce the player to the game. All with the objective to make the foundation of the stage for NPCs and in-game cinematics to begin to be fleshed out.

A lot of places, I can promise you that

One of the major demands I’ve faced these past few months have been that a 2 year long structural engineering construction project on the basement of my home has finally come to an end. Since 2020 I’ve been locked to a makeshift desk at my dining room table while contractor after contractor, engineer after engineer, would come to measure, drill, slam, deconstruct, and otherwise demolish and rebuild my basement. Along with the wonderful struggles of managing all this with 1970 asbestos construction materials integrated in every part of the house.

Its been an ordeal to say the least.

But, what’s that resulted in is a completed and newly rebuilt basement suite for my roommate promised to them 2 years ago. It has, however, also meant that we needed to renovate the otherwise unfinished room. Which has taken no small amount of weekends to realize over that time.

The really exciting thing about all this effort has been that slowly but surely we’re creeping towards having an actual office again. Complete with desk, and access to my dusty forgotten Cintiq.

Yup you heard me… I haven’t done digital art in over 2 years because I’ve had no means to set up a station for it.

Where we’re at now in all this is that we’ve migrated everyone to their promised rooms, but I’ve been utterly and completely burnt out since and have left the office in shambles, awaiting a golden moment where I can actually allocate some resources towards doing MORE renos to bring the office space to a comfortable state. 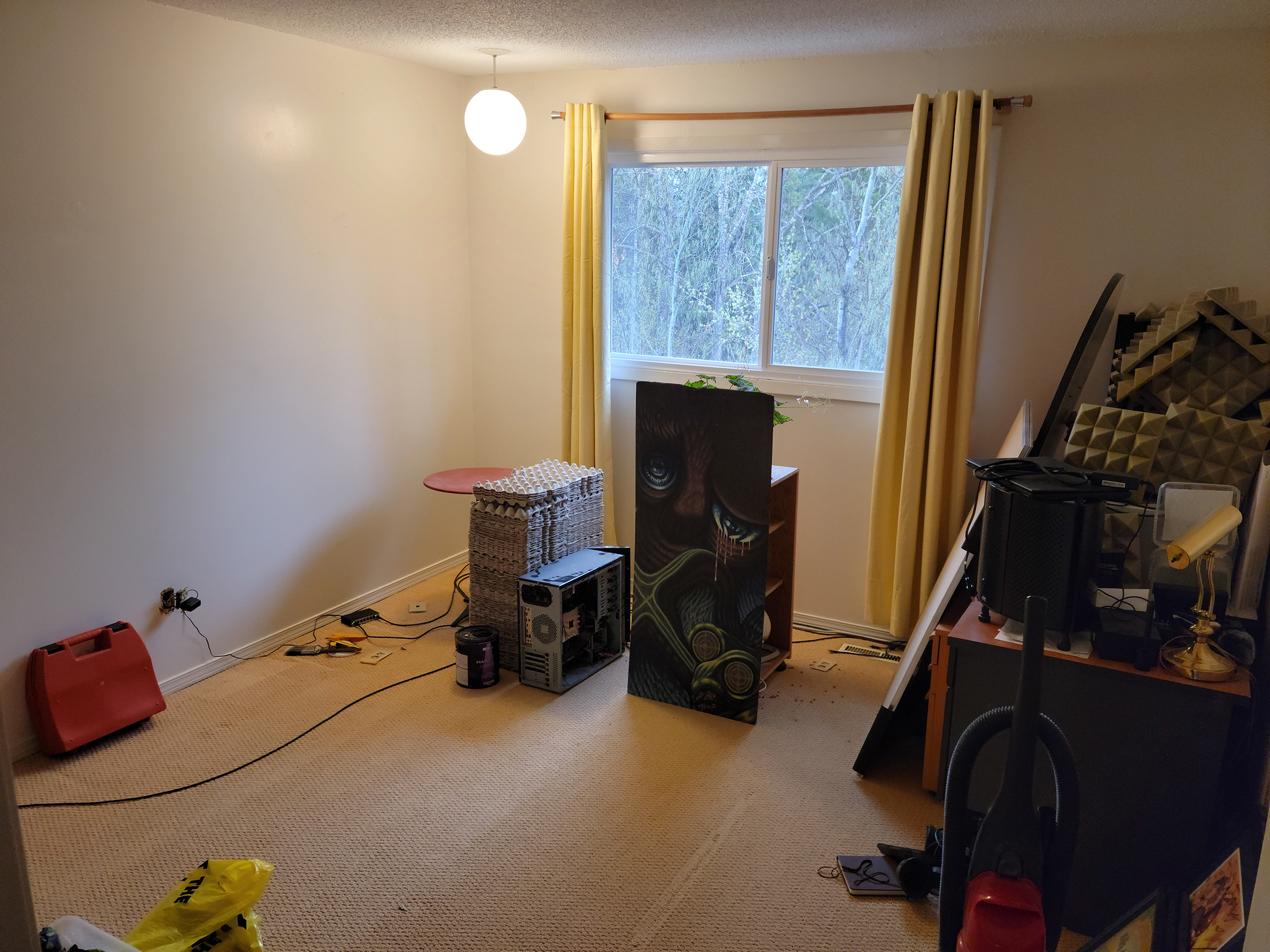 This is probably a good segue towards the brunt of the substance of the past two months. My health… ohohoho~ my health…

Oh Yes. As is signature of my months in review, you get the dirty gritty details of these spans of time.

I’ve been in really poor shape these days. It’s been a culmination of a lot of factors but it just has not let up in a long time. To clarify, entering this year I’ve probably been in some of the best health I’ve had in much of my entire life. It’s come with some compromise and a lot of careful balance, but in a lot of ways I’ve felt greater than ever. So much so that when I feel an onset of some of my signature health lows, I’ll recognize how permeating it was in my past that I never ‘saw’ the onset before now.

Which is all good! But now here’s the bad. 🙁

Work is stressful and demanding. I’ve never had such a consistent span of time where I’ve been so ‘thinking tired’ that I’ve experienced near continuous revulsion towards thinking outside of work hours. It’s led to me being a lot more reactive when I’m tired and it’s something I’m personally really trying to work on, as it’s not an aspect of my character that I want to enforce, yet is VERY strong in me. It’s the basis of Hayes’ anger issues, if you’ve ever had the opportunity to talk to me about his character traits.

Now that’s manageable in a vacuum, but hasn’t been the sole contributor to my decline in health.
Part of my peak in health has been a continuous effort and investment in regular appointments to chiropractic and deep muscle massage therapy to maintain a semblance of physical health, which has always been a struggle for me. Only now have I had the income to actually strike a chord where I’ve been able to maintain good health rather than remedy poor health, and it has been transcendent to say the least.

However… I had an unfortunate chain of events where not two days after an adjustment did I slip my back and lock it in a way that was utterly debilitating but I then had my partner with a pretty aggressive flu right through my next massage AND chiro appointments. That left me in a horrific state of constant pain and borderline paralysis to movement.

That persisted long enough to erode so much will from me that I’ve been in a ceaseless depression ever since. My body reacts quite negatively to small instances of discomfort now and I just can’t seem to shake this vacuous presence of… well nothingness. Objectively I can process all the good and prospering things in my life, and there is truly a great deal of it, but when I query my body for any sign for why I should not be devastated, anxious, and grieving I get crickets. The worst part of it is that I feel I’m completely taking my life for granted whether it’s been by choice or not, because the negative way my body reduces the world around me seems so unfair and unappreciative to those that care and take part in me and my life. They don’t deserve a microcosm of any of it.

I truly don’t believe my world is the way it’s been painted by my faculties, but the impact it has on me physically is still very very real and it’s been tormenting me for weeks on end now.

I truly hope to keep fighting the good fight and rise back up to the good health I’ve proven I can have and maintain for a good extent of time.

But let’s look at some of the other things going on that are much cooler than this.

Way cooler? I find that hard to believe.

Oh you betcha this is cool.

First and real quickly. The project I’ve been working at for work is in the final stretch and may be coming out with a publicly playable version in the next month. I can’t get into more detail than that, but I’ll be sure to shout it from the rooftops when you will be able to play!

But here’s the real and way more cool and awesome thing that’s come from this very tumultuous couple months.

Because I’m going to be getting my office, and subsequently my Cintiq, back in action. I’ve got plans to return to Some People’s Kids!

It’s been something in my mind for some time now, especially since I’ve been so immersed in programming and development. I’ve been itching to return to some storytelling and static media that is far from the demands of programming and game design. It seems like a great medium to focus on for my Friday Work Days, and something I can intentionally make in a smaller scope than my other more ambitious projects.

But that’s not to say that a small scope will be a bad thing for SPK. I’ve opted to go for purely raw as my scale down of effort. I had a chat about the series with a fan a while back and they had mentioned that their all time favourite SPK media was The Sunday LARP. A red-lined, sketchy, animatic with me as the sole voice actor for everyone that I made as a first draft for a funding pitch. I’d long ruled something like that out, as in a lot of cases it was pretty bad. But since that conversation it’s clung to the back of my mind… if you can get the substance of the characters out, and deliver a story that satisfies in a small 11 minute chunk. You may actually be able to explore actual characters and stories, iterate on joke making and storytelling without a year long investment to fully render all the visuals to carry along that base story… All those things seem to really point towards it not being as farfetched as it once seemed.
Maybe I’m just becoming way less picky as an artist. Haha.

So yeah! Keep an eye out. I’ve put together an outline of some greater pacing to the series, I’ve got a much more mature standing in Wolfgang and Hayes world and I’m just REELING to start telling some stories. Make you laugh, make you cry… We’ll see, because I’m going so raw as to not even hold on to any explicit expectations over how their lives will play out or where the stories will go. I’m leaving it up to the characters to dictate that.

I appreciate everyone’s continued interest in following Genome Studios work. While it can be stressful to feel accountable to the faceless entity that is the public, I’m also so happy to keep having even a scrap of energy to work towards making artwork for your enjoyment.

I appreciate your understanding in the very human struggles that I face and am trying to overcome, as we all do.

And I’m excited to claw my way out of that pit so we can all enjoy some sweet games, sweet stories, and some awesome work in making that a tangible reality for us all to enjoy!

Here’s to one more Completely normal amount of months to wait before summarizing them into a blog post in Review!